There are likely risks your company is currently self insuring. Some of these risks are obvious to you; for example, you may decide that for certain risks where you have a history of frequent, small claims, you’d rather pay the claims directly instead of relying on insurance coverage. However, because you want to make sure you are covered in the event one of those small claims becomes a very large claim, you keep traditional coverage but maintain a high deductible. So, effectively, you are self-insuring your claims up to a certain “retention” level. You may even have excess or catastrophic coverage that goes beyond that initial policy limit. 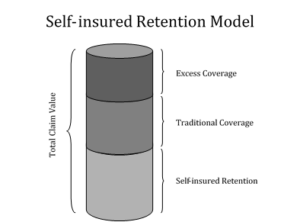 So what’s the benefit to self-insuring small claims? Why is that a better alternative than simply paying a small deductible and letting the carrier cover and manage most of the claims? First, there is control. If the insurance company is not involved, you have the freedom to manage and settle those claims as you see fit. You can set policy, determine who adjusts the claims, establish the settlement-authority levels, and so on. Second, those claims don’t directly impact the cost of your insurance (usually). Generally speaking, your policy rates are going to be based in large part on claims against the policy. Third, you can still retain catastrophic coverage; that is, a layer of protection that can provide necessary levels of predictability for your company. But wait a minute. Doesn’t this look familiar? You are managing your small claim activity, setting policy, paying out claims and purchasing “excess” or “catastrophic” coverage (i.e., high-deductible coverage). That looks a whole lot like you are running a captive insurance company. The only thing missing is the premium payments to deduct as a business expense. Essentially, you’re already doing the work that a captive insurance operator would be doing, but you’re just not getting the tax benefit.

Let me give you a practical example of this potential benefit. We have a client that had a partially self-insured medical insurance program for their business. Before they went self-insured, their premiums for a PPO plan were $60,000 per month. They have very young, single employees so they decided to go with a partially self-funded plan. They retain the first $25,000 of all claims per employee and purchase Transamerica insurance to cover the excess of loss. They pay $15,000 per month for the Transamerica excess policy and they are required to put $32,000 per month in an ERISA sinking fund. After claims paid, last year they had an additional $300,000 in the trust. Since this was not deductible, they had to pay corporate taxes on this additional money left in the company. A captive could eliminate the extra tax burden on the company using the captive to insure the first $25,000 per employee. The captive can also negotiate the specific stop-loss (excess coverage for each employee) and the annual aggregate stop-loss (captive total payout) from the reinsurance market. Without a captive insurance company, you are only able to buy what is, in essence, a high deductible plan, not a reinsurance contract. The high deductible policy has most of the retail charges and commissions heaped in so the savings is minimal.

We can see then how a captive can be used to replace existing risks that are self-insured up to a certain claim level. But what other coverages are appropriate for a captive insurance company?